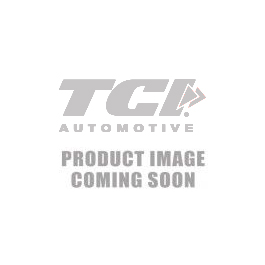 Turbo-Hydramatic 425 (TH425 or THM 425,[1] later 325) was an automatic transmission developed and produced by General Motors. The THM425 was a derivative of the THM400; most parts directly interchange and some others will interchange with minor modifications. The internal parts spin the opposite direction in the THM425; the helical angle of the planetary gears is 'reversed' and the one-way clutches freewheel in the opposite direction, for example. The THM425 was developed for the 1966 Oldsmobile Toronado and the 1967 Cadillac Eldorado. A lighter-duty transmission known as the THM325 (using components sourced from the THM200) replaced the THM425 in both car lines after the 1978 model year. 1979 and later longitudinal enginefront-wheel drive vehicles used the THM325. The THM325 became the THM325-4L with an overdrive added in 1982, but all vehicles using this transmission switched to more-conventional transverse engine mounting in 1986. Bellhousing pattern used the 1967-90 Buick-Oldsmobile-Pontiac-Cadillac V8 pattern throughout its entire lifecycle.