Four new zero-day vulnerabilities affecting Microsoft Exchange are being actively exploited in the wild by HAFNIUM, a threat actor believed to be a nation state.

Anyone running on-premises Exchange Servers should patch them without delay, and search their networks for indicators of attack.

Sophos MTR, network and endpoint security customers benefit from multiple protections against the exploitation of the new vulnerabilities.

The Sophos MTR team has been monitoring our customer environments for behaviors associated with these vulnerabilities since their announcement. If we identify any malicious activity related to these vulnerabilities, we will create a case and be in touch with you directly.

These signatures are also present on the Endpoint IPS in Intercept X Advanced.

If you see these detection names on your networks you should investigate further and remediate.

Due to the dynamic nature of the web shells, the shells are blocked but need to be removed manually. If you see these detection names on your networks you should investigate further and remediate.

We have also blocked relevant C2 IP destinations, where it was safe to do so.

In addition, the “lsass dump” stages of the attack are blocked by the credential protection (CredGuard) included in all Intercept X Advanced subscriptions.

When reviewing the potential web shells identified by the queries, the web shell will typically appear inside an Exchange Offline Address Book (OAB) configuration file, in the ExternalUrl field. E.g. 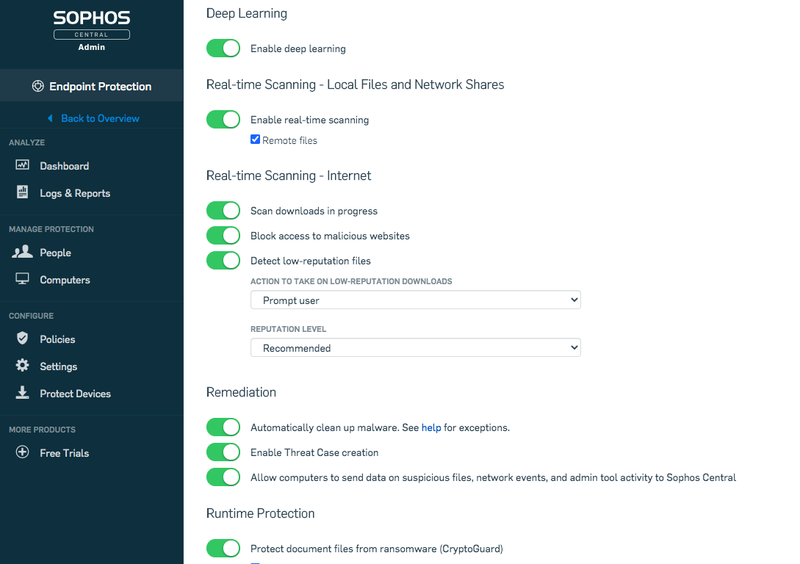 The Sophos MTR team has published a step-by-step guide on how to search your network for signs of compromise.

The actors behind DearCry ransomware are using the same vulnerabilities as the Hafnium group in their attacks. Sophos Intercept X detects and blocks Dearcry via:

Editor note: Post updated to advise that signatures are now present on the Endpoint IPS, and the addition of two further AV signatures 2021-03-12 09:10 UTC