Great scenes and songs from the!970 musical.

Three variations of the song appear in the film and on the accompanying soundtrack album produced by Wally Gold: the initial version sung by co-star Yves Montand, a reprise version sung by Streisand, and an orchestral version performed alongside a live chorus. The Streisand rendition was released by Columbia Records as a promotional single on 7' vinyl (with a stereo mix on one side and mono on the other) in July 1970.

The track received positive reviews from music critics, with many of them listing it as a highlight of the soundtrack.

'On a Clear Day (You Can See Forever)' was introduced by John Cullum in the 1965 Broadway musical of the same name. It was subsequently used in the 1970 film adaptation of the musical, in which Streisand appears as the main character. The song was recorded in early 1970 while filming the movie at Samuel Goldwyn Studios in West Hollywood, California.[1] Three versions of the song are used in the film, and all appear on the accompanying soundtrack album. The song is initially performed in the film by Streisand's co-star Yves Montand, whereas the reprise version is sung by Streisand and the orchestral version is performed with a live chorus.[2]

The reprise rendition was released as a promotional single on 7' vinyl in July 1970 by Columbia Records. The standard edition release includes both the mono and stereo versions of 'On a Clear Day (You Can See Forever)' as the A-side and B-side, respectively.[3] A limited edition version also exists, where the mono version exclusively appears on 7'.[4]

'On a Clear Day (You Can See Forever)' was written by Burton Lane and Alan Jay Lerner and produced by Wally Gold.[2] According to the official sheet music published by the Warner Music Group, the song is written in the key of E major with a moderately fast beat consisting of 126 beats per minute. Accompanied by the instrumentation of a piano, Streisand's vocals range from G3 to C5. She begins the song with the lyric 'On a clear day, rise and look around you / And you'll see who you are'.[5]

Streisand recorded a live version of the song in 1972, arranged by Peter Matz, which was released that same year on her Live Concert at the Forum album. Live versions by Streisand are also included on her 1994 album The Concert and her 2000 album Timeless: Live in Concert.

The Peddlers’ version was used prominently in the episode “Hazard Pay” from Season Five of Breaking Bad.

On a Clear Day You Can See Forever is a 1970 American musicalcomedy-dramafantasy film starring Barbra Streisand and directed by Vincente Minnelli. The screenplay by Alan Jay Lerner is adapted from his book for the 1965 stage production of the same name. The songs feature lyrics by Lerner and music by Burton Lane.

At the behest of her mainstream conservative fiancé Warren, scatterbrained five-pack-a-day chain smoker and clairvoyant Daisy Gamble attends a class taught by psychiatrist Marc Chabot for help in kicking her habit. She becomes unintentionally hypnotized and manages to convince Chabot to attempt to cure her nicotine addiction with hypnotherapy. While undergoing hypnosis, it is discovered she is the reincarnation of Lady Melinda Winifred Waine Tentrees, a seductive 19th century coquette who was born the illegitimate daughter of a kitchen maid. She acquired the paternity records of the children housed in the orphanage where her mother had to send her and used the information to blackmail their wealthy fathers. She eventually married nobleman Robert Tentrees during the period of the English Regency, then was tried for espionage and treason after he abandoned her.

As their sessions progress, complications arise when Chabot begins to fall in love with Daisy's exotic former self and Daisy begins to fall for him, and his university colleagues demand he either give up his reincarnation research or resign his position with the school. While waiting for Chabot in his office, Daisy accidentally hears a tape recording of one of her sessions and when she discovers Chabot's interest is limited to Melinda, she storms out of the office. When she returns for a final meeting with him, she mentions fourteen additional lives, including her forthcoming birth as Laura and subsequent marriage to the therapist in the year 2038. 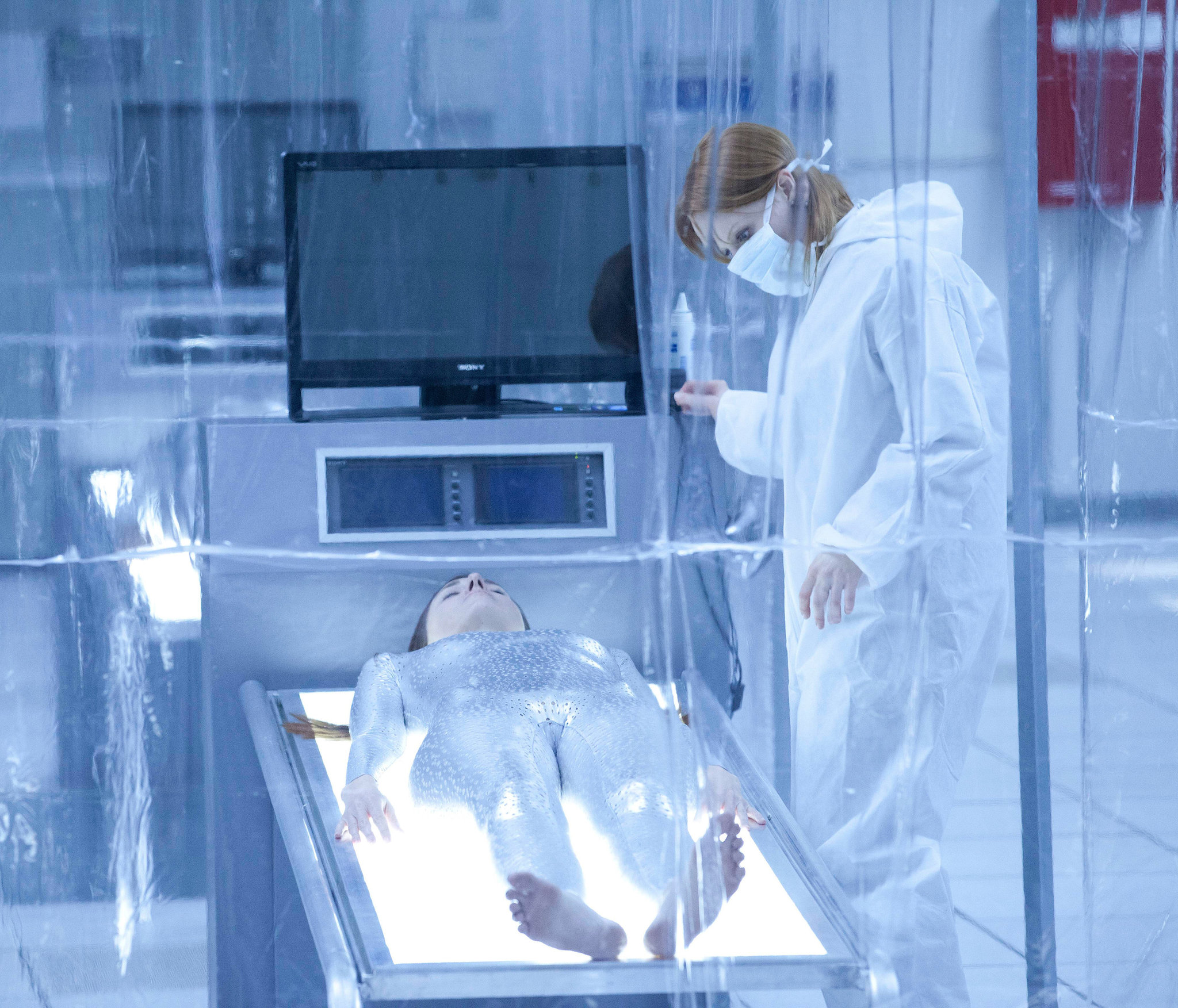 Alan Jay Lerner made a number of changes in adapting his stage play for the screen. The character of Frenchman Marc Chabot originally was Austrian Mark Bruckner. The period of Melinda's life was shifted ahead by a decade or two, her family background is different, and the cause of her death was changed from drowning at sea to unjust execution. In the stage play, the question of whether Daisy really was a reincarnation of Melinda went unresolved, but the film script made it clear she was. The character of Daisy's stepbrother Tad Pringle was added, although most of his scenes and his song 'Who Is There Among Us Who Knows?' ended up on the cutting room floor. Additionally, the future of Daisy and Marc's relationship was altered, and several ensemble musical numbers were excluded from the film.

New York City locations include Central Park, Lincoln Center for the Performing Arts, the Pan Am Building, the Upper West Side, and Lexington and Park Avenues. Scenes set in the UK were filmed at the Royal Pavilion in Brighton, Kemp Town, and East Sussex.

Cecil Beaton designed the period costumes. It proved to be his final project.

Paramount Pictures originally intended the film to be a nearly three-hour-long roadshow theatrical release, but executives ultimately had Minnelli cut nearly an hour from the running time.[3] Along with Tad's song, the deleted material included 'Wait Till We're Sixty-Five', a duet between Daisy and Warren, 'She Isn't You', Marc's response to Daisy's 'He Isn't You', and 'On the S.S. Bernard Cohn' although the melody can be heard in the background of the scene where Marc and Daisy drink and talk in a cocktail lounge.

In A Hundred or More Hidden Things: The Life and Films of Vincente Minnelli (Da Capo Press, 2010), author Mark Griffin examines the excised scenes, including a song entitled 'People Like Me'. According to Griffin: 'Even among die-hard 'Clear Day' fans, this missing number is something of a mystery. It's often referred to as 'E.S.P.', which may have been the song's title at one point. Stills of [Barbra] Streisand wearing a futuristic outfit at the Central Park Zoo have surfaced, offering what appears to be a tantalizing glimpse of this deleted sequence. In [Alan Jay] Lerner's script dated April 18, 1969, Montand's character croons 'People Like Me', which features the lyrics, 'To a sober-minded man of reason, E.S.P. is worse than treason.' It's been suggested that throughout the song, there would have been cutaways to Streisand in her various incarnations—past, present and future.'

The film opened on June 17, 1970 at the State I and Cine Theatres in New York City and then expanded in July and August before a broad release in September.[4]

Upon its release, the film received mixed reviews, though it has endured its initial criticism, being one of the few films with a 100% 'fresh' rating on Rotten Tomatoes.[5]

In his review in The New York Times, Vincent Canby called it 'a movie of fits and starts' and added,

On A Clear Day By Barbra Streisand -

'because the fits are occasionally so lovely, and the starts somewhat more frequent than Fifth Avenue buses, I was eventually hypnotized into a state of benign though not-quite-abject permissiveness . . . The movie is quite ordinary and Broadway-bland in most of its contemporary sequences. Miss Streisand, as a 22-year-old New Yorker whose Yiddish intonations are so thick they sound like a speech defect, defines innocence by sitting with her knees knocked together and her feet spread far apart, a mannerism she may have picked up from Mary Pickford. Minnelli's camera also is hard-pressed to find interesting things to look at in the humdrum settings . . . and a lot of the time it just records exits and entrances, as if it all were taking place on a stage. However, the movie, Minnelli and Miss Streisand burst into life in the regression sequences, filmed at the Royal Pavilion at Brighton. Minnelli's love of décor transforms the movie into very real fantasy, and the star into a stunning looking and funny character who mouths her arch, pseudo-Terence Rattigan lines as if she were parodying Margaret Leighton. She is so fine, in fact, that if I didn't know she was not terribly good at lip-sync, I would suspect someone else was reading her.'[6]

Gene Siskel of the Chicago Tribune gave the film three-and-a-half stars out of four and declared it 'a musical to see more than once, if not forever.'[7]Charles Champlin of the Los Angeles Times called the film 'just about as good as it could be,' yet 'dull. Nothing to get mad about, nothing to dislike. Just nothing to care about, to put your arm around your wife or sweetheart about, nothing to get so enthused about you forget there's a smoggy and war-infested world outdoors.'[8]Tom Milne of The Monthly Film Bulletin expressed disappointment that 'two of the best and liveliest songs in the show,' 'On the S.S. Bernard Cohn' and 'Wait Till We're Sixty-Five,' were not included in the final cut of the movie. 'Without them,' Milne wrote, 'it is merely a charming romantic comedy agreeably tricked out with charming songs.'[9]

TV Guide rates the film 2½ out of a possible four stars and comments, '[It] boasts great sets and costumes, but its script leaves much to be desired, and even the usually reliable Vincente Minnelli is unable to inject much life into the proceedings.'[10]

Time Out London says: 'Minnelli is able to decorate his material with beguiling visual conceits – the opening time-lapse photography, the colour contrasts between past and present. But he can do nothing to combat the script's length and shallowness, and there are some thumb-twiddling moments in between Burton Lane's delightful songs. The two star performers make an odd team, with their varying kinds of professionalism and vowel sounds.'[11]

The film was produced on a budget of $8 million.[1] It grossed $14 million at the box office in the United States and Canada, returning $5.35 million in theatrical rentals.[2][12]

The film is recognized by American Film Institute in these lists:

The soundtrack album to the film was released by Columbia Records in 1970.

On A Clear Day By Barbra Streisand Sheet Music