On A Clear Day By Barbra Streisand Song 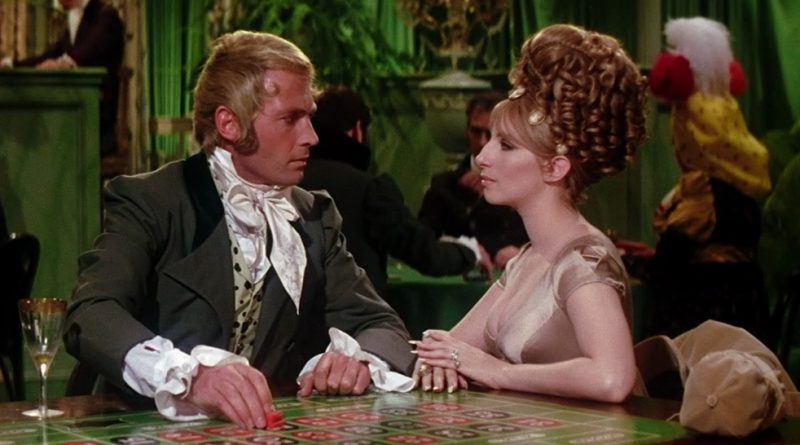 Barbra Streisand wore this burgundy Regency period gown by Cecil Beaton in On A Clear Day You Can See Forever (1970). Sadly, the segment this gown was worn in was cut from the final film. The flashback scene featured Melinda and Robert Tentrees mingling with high society in a salon at Brighton’s Royal Pavilion. It was heavily peppered with voice overs by Daisy and Marc. Thanks to Cecil Beaton’s photography, portraits of Barbra wearing this look are an indelible and well documented part of Streisand history.

In the 2003 book “The Unexpurgated Beaton: The Cecil Beaton Diaries as He Wrote Them, 1970-1980” Beaton recalled that he thought many of Barbra’s best gowns had been cut from the final edit of the film, noting “It may be said that I was paid well for the job and that is all I should worry about. But that isn’t the whole story. I really sweated to see that things were perfect, and that is the only way I can work.” Barbra loved wearing Beaton’s costumes and they remain some of her favorites worn onscreen. She still owns several of Beaton’s creations from the film, one of which is prominently displayed on a dress form in her “Antique Clothes Shop.”

In his 2008 book Women I have Dressed and Undressed, Arnold Scaasi recalled designing the modern clothing for On A Clear Day You Can See Forever with Beaton at the helm of the period creations. “While I was to do the modern clothes in the film, Cecil Beaton was to do the period costumes. Part of the story takes place around 1815, when George IV, the Prince of Wales, was regent of England. The period was right up Beaton’s alley; he had done the same kind of clothes beautifully for other period plays and films. I, on the other hand, was very excited about doing the contemporary clothes, because it had always been my wish to get Barbra out of those period costumes worn in Funny Girl and Hello! Dolly. For once, I could dress her as a modern, contemporary young woman.” The press loved Scaasi’s efforts and he said “I was happy as a clam! I had accomplished what I set out to do-bring Barbra Streisand into the hip world of the 1970’s.”

While Scaasi was a fan of Beaton’s designs on the film, the feelings were not mutual. Beaton said “The public sees her as very contemporary, but I think her soul is old-fashioned, and in all honesty, she was far more likable, more at ease, in the old English sequences of the picture than as the neurotic college student in those dreadful mini-skirt creations!” Beaton appeared to generally hate mini-skirts and once said “Never in the history of fashion has so little material been raised so high to reveal so much that needs to be covered so badly.”

It was a genius choice to hire two different costume designers to dress Daisy and Melinda. The contrast in their styles and work absolutely helped to capture the vast difference between the two characters.

By the time Sir Cecil Beaton (1904-1980) met Barbra Streisand he was already a celebrated legend. He got his first camera at age 11 and by the 1920’s was working as a fashion photographer for Vogue and Vanity Fair. 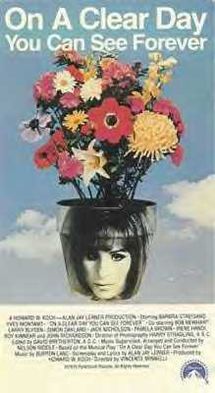 Beaton published his first collection of works (The Book Of Beauty) in 1933. His popularity quickly grew to the point where he was asked to photograph the wedding of the Duke and Duchess of Windsor in 1937. He would go on to photograph Queen Elizabeth II many times, including after her Coronation.

During World War II, Beaton served in the British Ministry of Information, covering the fighting in Africa and East Asia. Afterward, his fashion photography became less flamboyant and he took up other visually creative activities like designing costumes and sets for theatre and film. His work in these areas was as lauded as his photographs. Beaton won the Academy Award for Best Costume Design in 1958 for Gigi and two more times in 1964 for both Costume Design and Art Direction of My Fair Lady. He also won four Tony Awards between 1955 and 1970. Shockingly, Beaton was overlooked for an Academy Award nomination for his exquisite designs for On A Clear Day You Can See Forever, which become the last film he ever worked on. Beaton was knighted by Queen Elizabeth II in 1972 and suffered a paralyzed stroke in 1974 which left him frail until his death in 1980. His last ever interview from 1980 can be heard here.

On A Clear Day By Barbra Streisand Full

Cecil and Barbra had first met years before On A Clear Day You Can See Forever was in production. A 2018 article by Sotheby’s celebrating famous images from the Cecil Beaton Studio Archive recalled that “Beaton first saw Barbra Streisand singing in a nightclub in New York in the summer of 1963. It was early in her career but he was captivated by her talent and unique look – “this strange Cleopatra-like profile with bold flow from forehead to nose”. That October he photographed her for the first time (these photos appeared in March 1964 Vogue) and in 1969 he would go on to design her costumes for the film On a Clear Day You Can See Forever. Although he was initially skeptical of working with her, he was pleasantly surprised: “Her publicity is so bad that I feared she might be the tyrant, the virago, the bitch that she is said to be. Instead she was particularly ingratiating and amenable. From the moment she appeared, late, at the rehearsal, it was evident she has star quality, is a natural. She is above all else intelligent. Her brain works so clearly, so healthily. She could be a lawyer”.

Although Beaton was known for his sometimes damning assessments of some of the world’s most famous people, Streisand escaped his cutting remarks as he genuinely liked her: “I admire her. She cannot be made to say she likes something unless she is one hundred per cent sold. Here’s hoping that we continue to get along together as well so far, for we have argued, we have disagreed, we have said our pieces, but we give and take as professionals with a job on hand. I treat her as an equal, and only now and again do I realize that I am sparring on equal terms with someone who is fifty years younger than I am!”

Another great documentation of Cecil and Barbra’s time together comes from a 2011 V Magazine piece written by Elliott David which featured photos by Lawrence Schiller.

“In 1969, Streisand and her entourage of hairstylists, makeup artists, and wigs traveled to London to film Vincente Minnelli’s adaptation of On a Clear Day You Can See Forever, a story about a chain-smoking clairvoyant New Yorker who, while undergoing hypnosis to kick the habit, discovers she’s the reincarnation of a coquettish 19th-century British lady. And to help Streisand make the shift was famed photographer and designer Sir Cecil Beaton, who designed the costumes for the film. Beaton had already won two Academy Awards for his masterful designs and art direction in My Fair Lady, and was a world-renowned photographer of celebrities, intellectuals, and royalty. In tow during that trip to London was photographer Lawrence Schiller who documented it all and who shares with us here these previously unpublished photos. “This was a man of elegance and taste,” says Schiller of Beaton. “And his reputation preceded him. So Barbra and [Beaton] got along fabulously. She was like a little puppy dog in Beaton’s presence. You know, she would bark every once in a while, and voice her opinion, but she was delighted with what he created. He understood her face, he understood the shape of her body. And Barbra knew what her assets were. Of course the greatest asset was her voice, but now she was moving on in life and she was making the transition to becoming a great actress. Eventually she’d become a great director. So what do you do, you surround yourself with the most talented people in the world. And she surrounded herself with Cecil Beaton.” Clear Day would be Beaton’s final project, and this was not merely a transformation of Streisand’s character, but for Streisand personally, as he would forever have an impact on her style and grace.”

This beautiful burgundy gown reflects the empire silhouette which was so popular during the Regency period, which lasted from 1811-1820. This style is a favorite of Barbra’s. She has worn it many times throughout her career making it synonymous with her image. The empire look was adopted from Greco-Roman style tunics. During the Regency period, following classical ideas by copying Greek and Roman styles was extremely in vogue. This new and more natural style accentuated the bodies natural lines, hid any stomach flaws and elongated the legs making it flattering on many body types. Flowing empire-waist gowns in pale colors were indicative of a woman’s social status since they were so easily dirtied. Upper “genteel” class women typically changed several times a day and their fashion revolved around social gatherings.

This ornate look would have been the last change of the day for Melinda and appropriate as an evening gown as seen in the film. The outer layer of this gown was made from burgundy silk-velvet. The revealing V-neckline bust area is molded around a built-in, size 34A bra with boning and separate hook and eye closures. The bra has a label reading “Saks Fifth Avenue.” The fabric around it is artfully pleated, sweeping upward into the gathered, dropped cap sleeves. This area of the dress fits Barbra like a glove and was sculpted to perfection.

Each circle is edged in gold glass bugle beads which have ornate gold flowers nestled between. These handcrafted flowers feature eight petals each and are formed using gold embroidery thread and tiny glass bugle beads. There is a red flatback half-pearl at the center of each flower.

The underlayer of this gown is made from pale gold silk and has snap closures. The back of the gown features an elegant scoop back and a triangular sweep train with hook and eye fastenings.

Shawls and wraps were a very practical necessity in the Regency period, as lightweight empire style gowns provided little protection from the cold. These were most popular in a solid colors with an eye catching trim. In this case, Beaton created a 110”X 22” wrap from burgundy silk-velvet.

On A Clear Day By Barbra Streisand Music

The ends are gathered tightly with velvet piping and garnished them are four 7” long tassels.

This was paired with above the elbow gloves, a matching head wrap and voluminous hairpiece with a large, jeweled chandelier clip at the center.

On A Clear Day By Barbra Streisand

On A Clear Day You Can See Forever was just released on Blu-Ray. Get your copy here.