For many years, I have been using Google Docs was the primary repository for all of my notes, drafts, and journals.

Over the past few months, I’ve (1) heard lots of great reviews of new note-taking apps and (2) I have personally been using VS Code a lot more for writing code.

I recently evaluated all of the alternatives and landed on using a suped up VS Code as my primary notebook. This post details the how / why.

Suping Up VS Code as a Markdown notebook

Before I do a comparison of some alternative note-taking apps and talk about how I was using Google Docs for years, I’ll talk through the details of how I customized VS Code.

One of the main features I wanted with my notebook was vim keybindings. The VSCodeVim Extension provides these.

How I Organize Notes 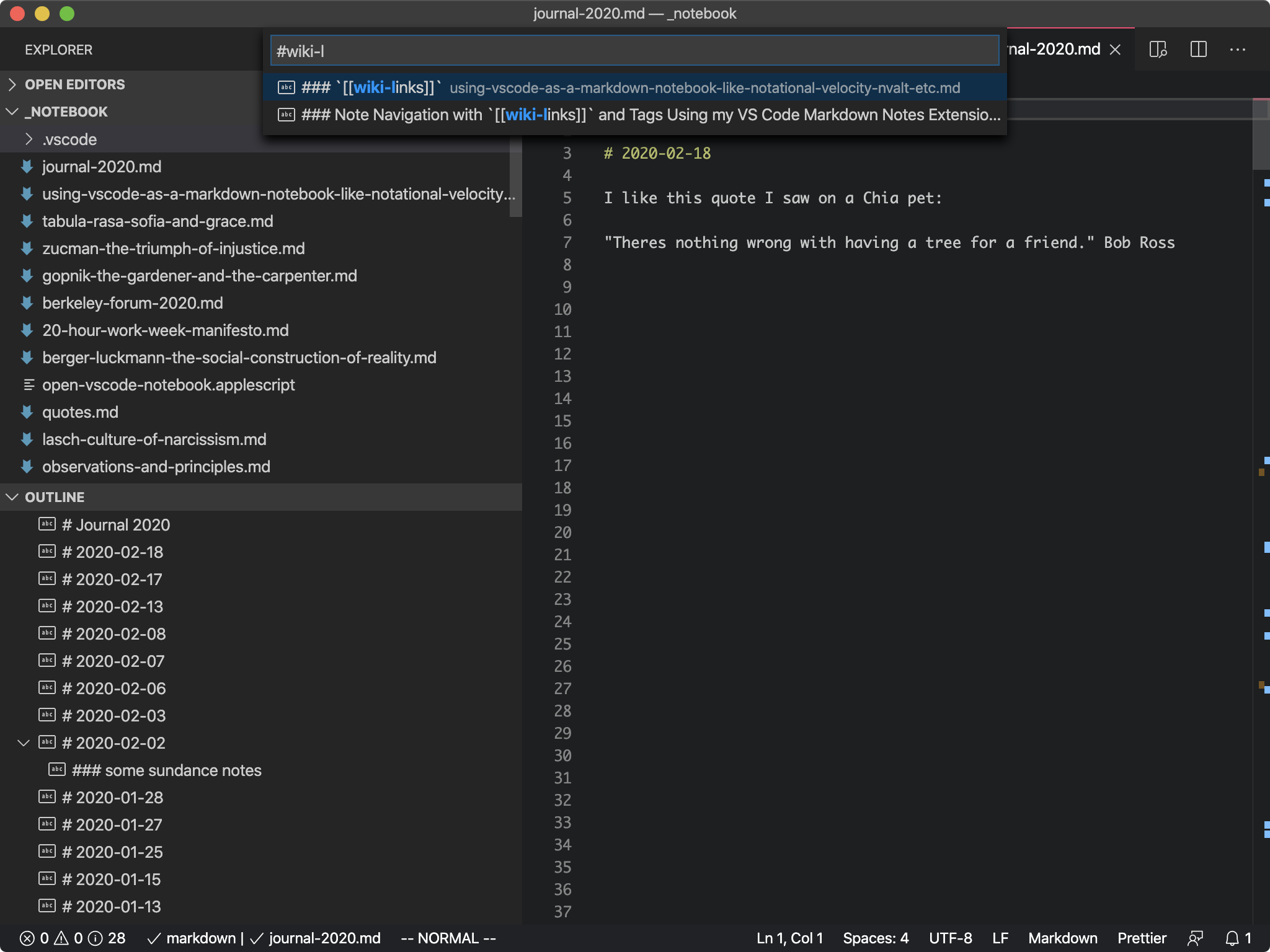 I basically organize notes into 2 types of files (similar to what I did on Goolge Docs), (1) a journal file for each year, where I record snippets, quotes, and transient thoughts and (2) dedicated topic / post / draft / note files, when there is a particular theme I want to collect a deeper set of organized thoughts around.

All of my notes are in a single workspace at $HOME/Google-Drive/_notebook and I don’t really use subdirectories to group them.

In the workspace settings ($HOME/Google-Drive/_notebook/.vscode/settings.json) I have turned on autoSave:

(1) Journals are in journal-YYYY.md files, one per year, with headings for each date I make an entry.

I have a snippet defined in settings.json with VSCodeVim normalMode keybinding:

(2) Longer notes and topics are in notes named topic-name.md in the main workspace folder (which you can see in the above screenshot in the File Explorer in the left Panel).

In my workspace settings ($HOME/Google-Drive/_notebook/.vscode/settings.json) I set the following so the most recently edited notes sort to the top of the File Explorer in the left Panel of VS Code:

I also find it extremely helpful to have Outline view open in the File Explorer. This will show all the headings as a tree for easy navigation. By default, for some reason it is not sorted top to bottom, so I set the Sort By: Position setting:

Search Headings Across All files

Another feature I accidentally discovered was the ability to search for headings across all notes with the Command Pallette (cmd+p) and starting a query with the # character:

I want to be able to quickly open my notebook from any context, so I have a global hotkey (cmd+shift+o) bound to run the following bash command:

I mentioned I keep all of my notes in the top level of my notebook workspace rather than organizing into subdirectories.

This is because the main way I open notes is through the workbench.action.quickOpen VS Code keybinding (cmd+p):

To improve the functionality of the VSCodeVim jumplist (ctrl+o, ctrl+i) in settings.json I turned this off:

A popular feature in Roam Research and Bear is the ability to quickly reference other notes using “Cross-Note Links” in the [[wiki-link]] style.

I wrote an extension – VS Code Markdown Notes which adds support for navigation with [[wiki-links]] and #tags.

This gets to my point about the extensibility of VS Code – the Extension API is really powerful and because all my notes are in flat files, it was a matter of a evening coding sessions to roll support for this stuff from scratch. I was even able to take advantage of the fact that VS Code is an IDE with support for things like function/keyword definitions to add bits of ‘flair’ like Peeking linked notes inline.

Screenshots of the Features of My Extension

Peek and Go to Definition for Wiki Links

cmd+shift+f to Search Workspace for Notes with #tag

NB: There was a similar VS Code Wiki that I tried out before writing this extension, but I didn’t love the way it still required the link destination in the (parens) after the link title and handle a few other details.

My next thought before building my own extension was I could just use the gf command from VSCodeVim to navigate to these files, which did work, but didn’t help with the autocompletion, syntax highlighting, previews, or tags.

One of the features that people rave about in apps like(Notational Velocity, nvalt, Bear, FSNotes) is the “Search or Create” bar, which basically lands you into a search but allows you to quickly create a note if you don’t already have one.

This is sweet and I have not 100% replicated it yet.

I tried the VSNotes extension, but didn’t love the nesting of input boxes in the Command Pallette and the way it used frontmatter for tags (but it is certainly pretty thoughtful, offers a bunch of nice features, and is worth checking out – I think it was just a style thing for me).

UPDATE: I added a command to the VS Code Markdown Notes Extension that duplicates the functionality I had initially implemented as a workspace task.

I have it setup with a shortcut in my keybindings.json to open a prompt for a “Title Case NoteName” that will create title-case-note-name.md and add a heading:

Markdown All in One Extension

Markdown All in One is an extension I installed from the Marketplace that adds some nice conveniences like automatically starting newlines with a - character when you are adding to a list, shortcuts for creating a table of contents, additional support for reference links and Math functions, etc.

I tried a few different spell check extensions. Spell Right seemed to cause a ton of typing lag so I immediately uninstalled it.

Next I tried Code Spell Checker and it has been awesome.

I bound z= to open the Quick Fix to mirror the shortcut in Vim:

Many apps like Bear and FSNotes have a better inline image preview render in the editor itself. With VS Code, while you can open the rendered Markdown Preview in a tab to the side, you cannot render images inline in the editor.

I don’t always love having the preview open, so I did a little searching and found the Image Preview extension which allows you to view a hover preview with cmd+k cmd+i:

I wanted the image to render as large as possible in the preview without scrolling and found this to be the max I could get working in settings.json:

I use the Tomorrow Night Theme for VS Code, but wanted to mute the color of block quotes and some punctuation. I found some tips for how to really tweak markdown styles in VS Codehere on StackOverflow.

Here are the mods I made:

After porting all of my journals from Google Docs, I wanted to backdate the modified dates. This was a good example of something I could easily do with bash since these are all flat files:

For years, I was looking around for a notebook that had all the features I wanted on Desktop as wellas a way to edit notes on my phone. I never landed on a notes solution on my phone that I liked, and(even when I was using Google Docs, which does have a decent mobile editor)I ultimately always ended up reverting to just emailing myself notes on the go (typing as little aspossible) and then fleshing out these ideas when at a full keyboard. The two apps I use to emailmyself quick notes from my phone are Drafts andCaptio.

Drafts is a little more customizable, Captio has better support when offline / in airplane mode, soI kind of use both.

I was using Google Docs for all my notes for a long time. It has the best / most clear sync (very obvious when something doesn’t sync to cloud), a good mobile editor, good rich text / inline image support.

The killer feature is really the sharing + commenting and I will still use this to share a draft of a blog post to get comments and feedback before publishing.

It is kind of annoying that it’s not markdown, however, (since I use markdown for blog posts – my flow for translating a draft to a blog post was to copy everything from the Google Doc and then use Paste to Markdown to convert it.).

Also, I have a lot of other stuff in Docs that is not personal notes, so the search index was a little cluttered (but search in Docs is obviously great because it’s Google).

Of all the dedicated notes apps I tried, my favorite wasFSNotes. It self describes as:

It has a kind of ‘coder ethos’ which I like. Everything is stored in plaintext, you can use textbundle if you want, it is backed by a git repo so you have version history, it is open source, and there is a mobile app.

By default it will use iCloud to sync and is pretty reliable (but you could also use Dropbox or Google Drive to sync as it is filesystem based).

There’s no inline image support (uses a side preview instead) and no vim keybindings.

Bear is pretty similar to FSNotes with slightly more visual design polish – for example the inline images look great, there is a web clipper, support for cross note linking and tags.

My main gripe with it was that it was backed by a sqlite database rather than flat files, which makes it a little harder to script.

There is a free version and paid version.

I have some friends that really love Roam. It’s very optimized for chunking notes as concepts and linking between them.

It feels very much more like a mind mapping tool / memory extension, designed for bullets and snippets, not as well suited to fleshing out these bits into longer form posts.

It is a web based app, not backed by the local filesystem.

Notational Velocity andnvalt are some of the classic dedicated note taking apps.

They both have ways to very quickly find or create notes.

My main issue: no Vim keybindings.

Other VS Code Extensions

I looked at some of these but ultimately ended up not using:

Instead I made the VS Code Markdown Notes extension.

It’s on github if you want to submit a PR or feature request.

Type mind in the Atom command palette to open a mindmap view of the current markdown file. The full command name is Markdown Mindmap: Toggle.

By default there is no keyboard shortcut to avoid conflicts. If you want to use one open menu Edit -> Keymap... and add this to the file:

You can switch between different themes in package settings. Dark themes variants are also available.

This extension is built using the markmap component.

Suggestions for new featues are welcome, feel free to open an issue.