The art of a great murder mystery is believing in the con. 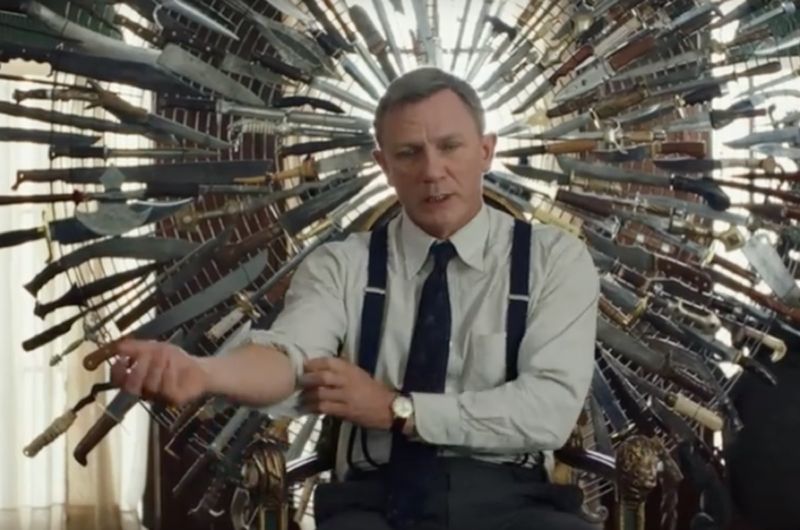 From the initial setup forward, the audience needs to believe the crime being committed is established fairly. Yes, this person is dead and yes, there is reason to suspect foul play. Too often, this genre attempts to play cute with the circumstances – maybe they’re not actually dead or it was a rabid raccoon – and it obliterates our engagement. We need to WANT to solve this murder, to throw on our deerstalker and guess the where/with what/whom long before our methodical hero or heroine arrives to roll off the specifics during a pithy final reveal, to perspire needlessly as we anxiously attempt to decipher every clue. In Knives Out, director Rian Johnson’s ode to Hollywood’s greatest sleuths, seeing is believing.

One week prior to our arrival, wealthy family patriarch and author Harlan Thrombey (Christopher Plummer) has died by apparently slitting his own throat. Hired by a phantom benefactor to investigate Harlan’s death is renowned private investigator Benoit Blanc (Daniel Craig), who comes to – as he states with his eloquently Southern twang – suspect foul play. With the assistance of Harlan’s good-natured caretaker, Marta (Ana de Armas), Blanc interrogates the entire Thrombey family and its treasure trove of suspects and selfish motives onsite at the Clue-inspired Thrombey mansion, setting out to solve the most auspicious caper of his career.

Elaborating further on what transpires during Knives Out would only serve to spoil both the movie itself, and negate your beliefs in the con as a whole. What I mean by “con” is we the audience are looking at this given scenario as a falsehood; what every other character thinks happened here is not at all what transpired. We have to be sold on this or why remain invested? The best mysteries (Hound of the Baskervilles, Murder by Death, The Maltese Falcon) have an effective con at play, a backdrop where only us and our leading character know an insidious game is afoot. Elevating the stakes is writer and director Rian Johnson (Looper, Star Wars: Episode VIII – The Last Jedi), who has taken this concept and constructed a script that not only delivers a positively satisfying conclusion where even tiny pieces fit into the puzzle, it is also peppered with numerous character moments while simultaneously building on the initial setup until that eventual reveal.

The sharpness of the script lies in its ability to evolve, seamlessly layering plot points brick-by-brick, as the story continues to weave in-and-out of possibilities, all while dropping moments of genuine heart and hilarity. Every scene is spackled with clues and witty asides, bloodlines and treachery, reveals and revelations. Unlike most modern films, there is no moment I could point to and clearly proclaim, “if only you would have cut this” to tidy up the runtime. I’ve even run back through the film in my mind, hunting for holes or missed opportunities, and everything still fires on all cylinders. Johnson’s screenplay is so tight, Arthur Conan Doyle himself might struggle to put every piece in place before Benoit sinks his final putt.

Words only work if the right actors are in place to make them shine, and Knives Out is stacked with diamonds. Chris Evans, Jamie Lee Curtis, Don Johnson, Michael Shannon, Toni Collette, Katherine Langford, and on and on we go. If I broke down every character highlight, we might be investigating our own death before we finished. Suffice it to say, there is not a single character underplayed nor overshadowed. And although Craig and de Armas sparkle the brightest (and believe me, I’d kill a Thrombey myself to get another spin with Benoit and Marta on the case), not a single actor departs this film without leaving their own personal mark on the proceedings. This is an insanely well-cast ensemble.

That’s it. Too many spoilers ravage the interwebs these days and I don’t want to risk subtly or accidentally hinting in any one direction. You came here to find out if this is worth a trip to the theater and yes, it absolutely is. In a market overrun with remakes and reboots, the world screams for original movies, and so here you are. In terms of art, genre films like these often go unnoticed during awards season, which is ludicrous as this would qualify in nearly every category. Rian Johnson, his crew, and this brilliant cast deserve every accolade they can garner. Not only is it one of the best mysteries in eons, Knives Out is hands-down the best film of the year.

An enticing mystery, tight script, and a stellar cast deliver the best film of 2019.