Just like oxygen isotopes, the carbon isotope with more neutrons (C 13) is heavier, whereas C 12 is lighter. Throughout Earth’s history, the amount of C 12 and C 13 in the atmosphere and in the oceans has changed, which makes working with carbon isotopes a bit trickier than oxygen. The frac- tionation of carbon isotopes that oc- curs during photosynthesis is one of the most useful techniques for investi- gating the efficiency of CO2 uptake. Atmospheric carbon dioxide con- tains approximately 1.1% of the non- radioactive isotope carbon-13 and 98.9% of carbon-12.

14C is a radioactive isotope of carbon. It was discovered in 1934 by Grosse as an unknown activity in the mineral endialyte. In the same year, Kurie (Yale) exposed nitrogen to fast neutrons and observed long tracks in a bubble chamber. He had produced 14C. It was in atmospheric CO2 by Libby in 1946. He determined the half life to be 5568 years. This half life has later been re-determined by Godwin. The new half life is 5730 years. Libby recognized that due to its occurrence in natural materials, 14 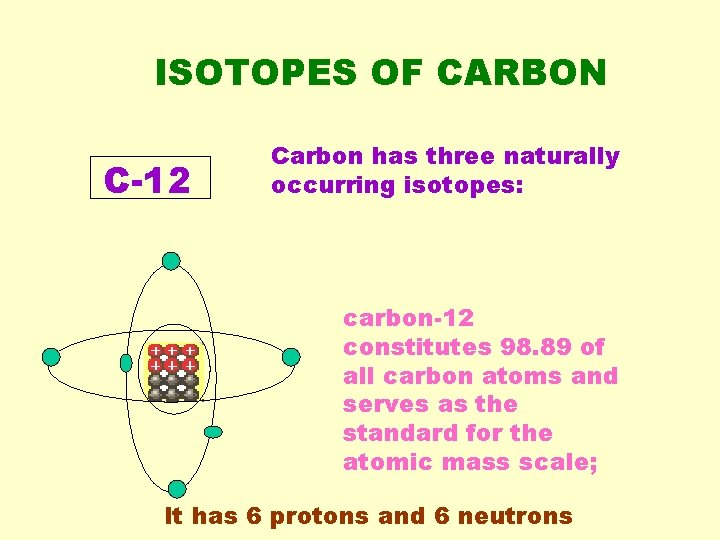 C can be used as a dating tool for materials that contain carbon compounds derived from atmospheric CO2 either by simple mixing processes or by carbon exchange. The mean life time of roughly 8000 years is ideal for dating of reservoirs that are a few decades to a few ten thousand yeas old. For groundwater, this means that 14C dating can be applied to aquifers that contain water formed during periods that reach well into the past glacial time. 14C is a widely used tool to establish chronologies for groundwater flow systems and climate records for the Holocene and Pleistocene. It is considered to be the most important tool for age dating of ‘old’ groundwater.

There is also a stable isotope of carbon, 13C. This isotope is important in that it allows us to correct for carbon isotope fractionation in nature and during analytical procedures.

Abundance of carbon isotopes in nature

13C measurements are reported in the d13C notation relative to a standard (PDB, or the newer VPDB standard, considered identical to PDB)
Isotope ratios are typically measured by mass spectrometry
d13C values cover a wide range in nature (Fig) influenced by fractionation processes analogue to what we discussed in the water isotope section
14C activities are referred to an international standard, known as as 'modern carbon' 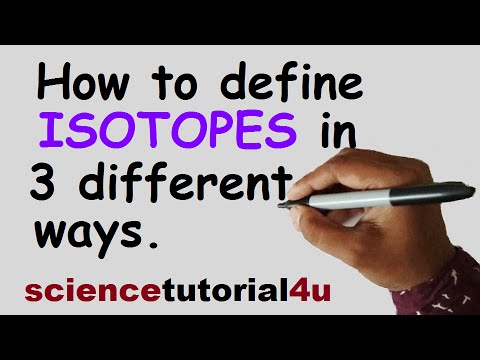 -1
The production rate has not been constant over time, comparison with tree ring chronologies and corals have shown variations in the production rate which result in an offset between calendar and 14C ages of thousands of years (Fig) (Fig)

Its half life t is 5730 years, i.e., somewhat larger than the half life determined by Libby (5568 ys). Differnt fields tend to use different half lifes.

The global inventory of natural 14C is about 75 tons. The specific activity in pre-industrial times was 13.56 dpm (gC)-1. dpm stands for decay per minute.

The notation of 14C activities is discussed in detail in Stuiver and Pollach (Radiocarbon, 19, 355-365, 1977). In short, 14C is calibrated against an NBS (National Bureau of Standards) oxalic acid standard. The internationally accepted radiocarbon dating reference is 95% of the activity, in 1950 AD, of the NBS oxalic acid normalized to d13C of –19.3‰ with respect to PDB. The factor of 0.95 adjusts the oxalic acid to the activity of wood from 1840 to 1860 (‘pre-industrial’). Results are reported in pmC (% modern carbon).

In the atmosphere, 14C is incorporated into 14CO2 and takes part in the global carbon cycle. It is assimilated by plants. Except for isotope fractionation, 14C in living organic matter is the same as that in atmospheric CO2. After organic matter dies, the 14C concentration decreases due to radioactive decay. If there is no isotope exchange, radioactive decay is the only 14C sink and if the initial 14C activity is known, an age can be calculated from the measured 14C activity of a sample.
In groundwater applications typically DIC (dissolved inorganic carbon; DIC = CO2(aqueous) + HCO3- + CO32-) is extracted from the water a and its measured 14C activity is compared to the initial 14C activity. Determination of the initial 14C activity can be challenging and typically requires correction models that account for the carbon chemistry in the unsaturated and saturated soil zones.

Isotopes Of Carbon Differ With Respect To The Number Of Quizlet

See summary in Clark and Fritz (chapter 8) for details

In short, the 14C activity of DIC (dissolved inorganic carbon) in groundwater is determined by the following factors: (Fig. 8.6 in Clark and Fritz): ‘real world’ systems are somewhere in between open and closed and the correction models mentioned above and described in Clark and Fritz (chapter 8) have to be applied.

Measurement There are many laboratories worldwide that can measure 14C routinely. However, only few 14C laboratories have the capability to measure 14C at precisions of ± 0.2%. In groundwater studies the overall error is dominated by systematic errors and the analytical precision is not as critical as in oceanographic studies.

Isotopes Of Carbon Have Different Number Of

Isotopes Of Carbon Differ With Respect To The Number Of

Isotopes Of Carbon Abundance On Earth