A crystalline material is one in which atoms are arranged in a regular pattern over large atomic distances. Thus, a long range order exists and upon solidification, atoms will positioned themselves in a regular 3-D pattern. Atoms are considered to be as solid spheres having well defined diameters. Lattice in a 3-D array of atoms arranged in space. Basic crystal structure governs by fracture strength of material.

These are the smallest unit of a structure which when repeated in all 3-dimensions produces the crystal structure.

Way of filling-up of points in space lattice in atom is known as basis.

Space lattice- Infinite array of points in 3-D space in which each point located with respect to other.

The unit cell has a cubic geometry, with atom located at the corners and centers of all the cubic faces.

It is equal to the number of nearest neighbour to an atom and number of atom touching it. For FCC the coordination number is 12.

Thus, total no. of atoms per unit cell are:

It is the ratio of volume of atoms per unit cell to total unit cell volume.

FCC structure has the maximum packing possible for spheres.

All sphere having the same diameter. Metals typically have large APP to maximize shielding provided by free electron cloud.

Examples of Metals having FCC structure:

Atoms are locate at eight corners and a single atom at the centre of cube. There are two atoms per unit cell of a BCC structure. Coordination number of BCC crystal structure is 8, and its atomic packing factor is 0.68.

Example of BCC structure are:

The third type of crystal is HCP. Here one dimension is greater than other two. The coordination number of HCP crystal is 12 and APF 0.74 same as FCC structure.

Some metals as well as non-metals have more than one crystal structure, this phenomenon is called polymorphism and when found in elemental solids the condition is termed as allotropy.

These material have different structure at different temperature.

The unit cell geometry is completely defined in terms of the:

A vector of convenient length is positioned such that it passes through the origin of the coordinate systems.The length of this vector projections on each of 3 axis is determined in term of unit cell dimensions a, b, c. The three number obtained are multiplied or divided by a common factor to reduce them to smallest integer values. The direction are represented as [uvw], i.e. not separated by commas.

The layers of atoms or the planes along which atoms are arranged are known as crystallographic planes. The relation of a set of planes to the axes of the unit cell is designated by Miller indices. One corner of the unit cell is assumed to be the origin of the space coordinates and any set of planes is identified by the reciprocals of its intersections with these coordinates. The unit of the coordinates is the lattice parameter of the crystal. If a plane is parallel to an axis, it intersects it at infinity.

In figure (b), or the cubic system, the crosshatched plane BCHG intersects the Y axis at one unit from the origin and is parallel to the X and Z axes or intersects them at infinity. Therefore,

Consider a plane that intersects the x-axis at 1, the y-axis at 3, and the z-axis at 1.

In a cubic crystal the direction has the same indices as the plane to which it is perpendicular. An approximate idea of the packing of atoms on a particular plane may be obtained by visualizing a single unit cell of the b.c.c. and f.c.c. structure.

Considering the atoms as the lattice points, the number of atoms on a particular plane would be:

For a particular material, equivalent directions have equal linear density. 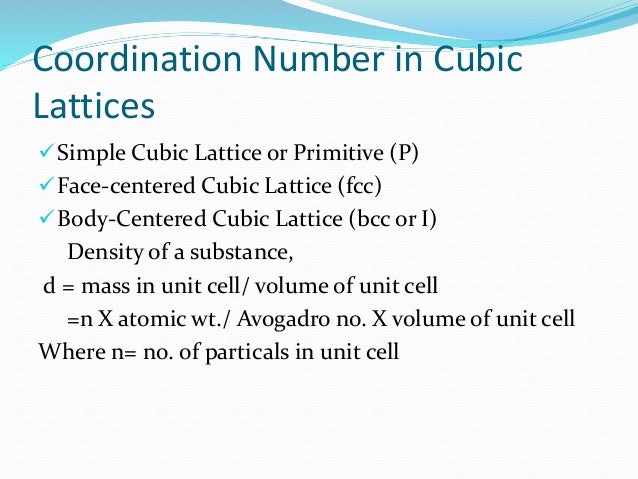 PD = No. of atoms centered on a plane/Area of the plane

L.D and P.D are important considerations as slip taken place on most dense packed crystallographic planes, an in those planes, along directions having greatest atomic packing.

The physical properties of some substances depend upon the crystallographic direction in which measurements are taken for e.g.: The elastic modules, the electrical conductivity and refraction index may have different values in [100] & [111] directions. This directionality of properties is termed as ‘Anisotropy’ and it is associated with variance of atomic and ionic spacing with crystallographic direction. Substances for which physical properties are independent of direction of measurement are isotropic materials.

The extent of anisotropic effects is a function of symmetry of the crystal structure i.e. degree of anisotropy increases with decreasing structure symmetry. Thus monoclinic, triclinic structure are highly anisotropic. For many polycrystalline materials, the crystallographic orientations of individual grains are random.

Each grain is anisotropic in nature but the specimen composed of aggregates of grains behaves isotropically. Also the magnitude of measured value represents some average of the directional values. Sometimes the grain in polycrystalline materials have preferential direction of orientation or growth, in which case the material is said to have a “Texture”.

Straight lines of same length are drawn on micro pictograph that show the grain structures. The grains intersected by each line segment are counted, and the length of line is divided by an average of the number of grains intersected over all the line segments. The average grain is then found by divided this result by linear magnification of the photomicrographs.

Where, n = given size number.

In poly crystal line material there are many preferred planes and direction for different grains due to their random orientation. Thus, in case of poly-crystalline materials “gross plastic deformation” take place, where in individual grains undergo comparable distortion and the grain boundaries do not come apart or open up. Before deformation the grains are equiaxed but after deformation they get elongated in the direction of applied forces.

Polycrystalline materials are stronger than single crystal material because they require more stresses to initiate slip and yielding. These higher stresses are consequences of constraints that are imposed on the grains during deformation.

When the specimen unload the strength of material got increase due to work hardening and if reloading it in opposite direction then back stress now support the movement of dislocation. As a result of that yield points in opposite direction appears prematurely. This phenomenon called Bauschinger effect.

At temperature = 0.4 melting temperature, upon cold working the number of dislocation in the material increases. The amount of dislocation multiplication takes place, is the property of material and it is expressed by work hardening exponent (n) in the flow curve equations σf = Kϵn

Higher the value of ‘n’, creation of dislocation is increased by cold working. Finally, these dislocation gather at the grain boundary and created dislocation forest.

These dislocation are repulsive in nature, which results in creation of back stress in the movement of dislocation. This is finally results in increase in strength of material upon unloading the specimen from the region of work hardening and reloading in opposite direction.

During recovery, some of the stored internal strain energy is relieved by virtue of dislocation motion in the absence of an externally applied stress, as a result of enhanced atomic diffusion at an elevated temperature. There is some reduction in the number of dislocation also. Physical properties such as electrical and thermal conductivities are recovered to their pre cold worked states.

Even after recovery the grains are still in a high strain energy state. Recrystallization is the formation of new set of strain free grains that are required. Dislocation densities are reduced and properties are restored to pre cold work conditions. The driving force is the difference in the internal energy of strained and unstrained material.

After recrystallization is complete, the grains will continue to grow if the metal specimen is left at elevated temperature this phenomenon is called grain growth. Grains boundaries are associated with higher energies, and as the grain size increases the total grain boundary area decrease resulting in reduction of total energy. This is the driving force for grain growth.

Here large grains grown at the expense of smaller grains which further shrink in size. Average grain size increases. This is done by short range diffusion of atoms from one side of boundary to the other. The direction of boundary movement and atomic motion are opposite to each other.

Time dependences of grain growth is:

where k, n ar constants and ‘do’ is initial grain size.