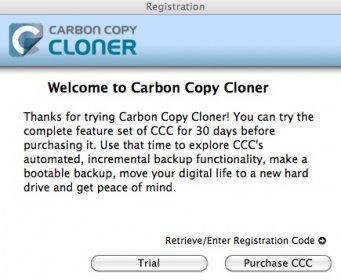 In the years that followed, Carbon Copy Cloner (CCC for short) received several useful updates, but other utilities eventually came along that offered considerably more functionality and better.

We're delighted to announce the next major version of CCC. With powerful new features for the advanced user and helpful features and simplifications for the novice user – CCC 5 makes managing your backups easier for everyone. Take a look at what's new in CCC 5:

Many users have asked for more advanced ways to organize their tasks, so CCC 5 offers task groups that have both organizational and runtime behaviors. Collect your tasks into groups simply to organize them, run a whole group of tasks with a single click, or schedule a task group to have those tasks run sequentially on a regular interval.

CCC's SafetyNet pruning settings will now automatically adapt to the amount of data your tasks need to copy. If a backup task runs out of space on the destination, CCC 5 will revisit the pruning of the SafetyNet folder, then resume copying. 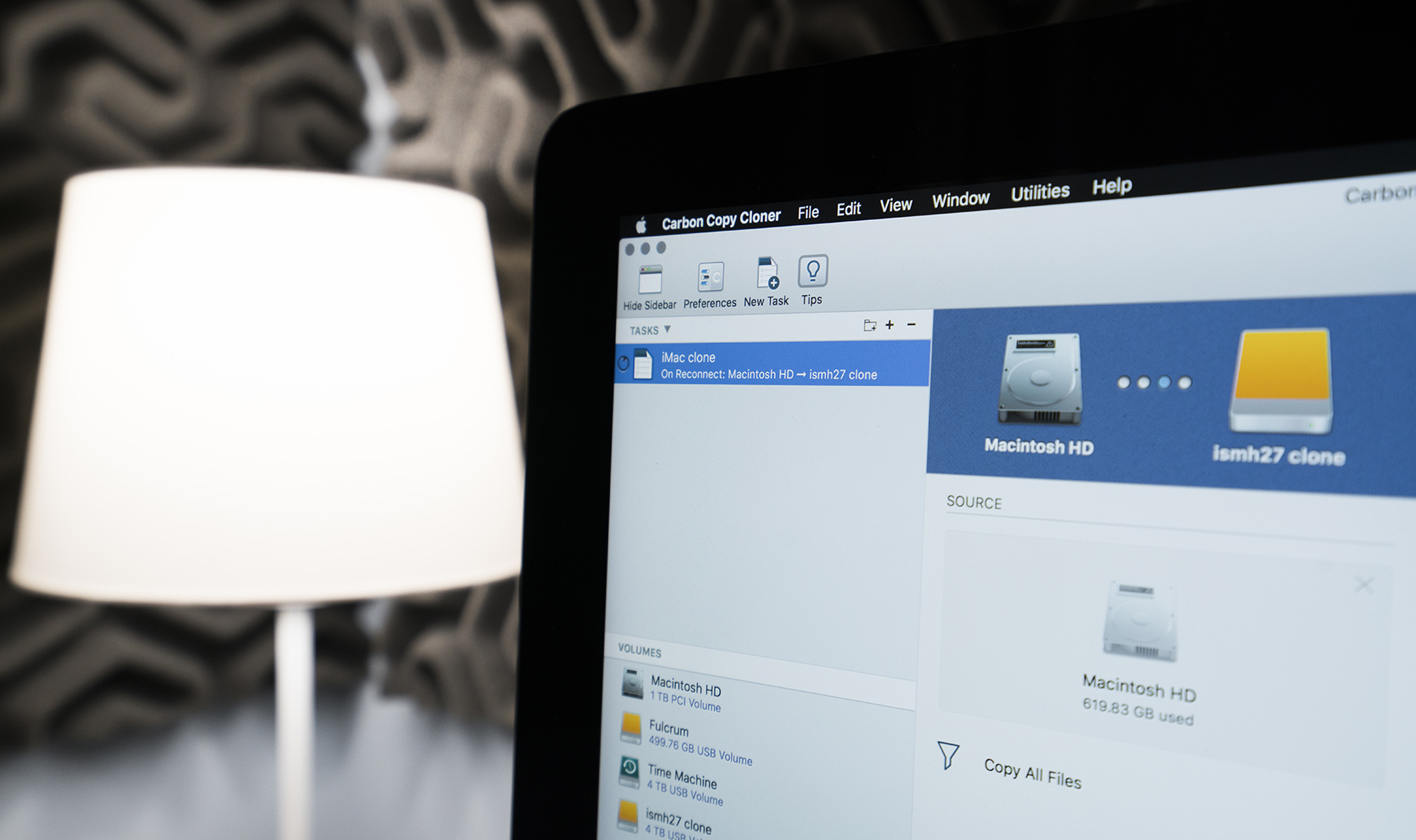 If you boot your Mac from a CCC backup, CCC 5 will open and offer to help you with a guided restore. In the guided restore, CCC 5 will create a new restore task, select the startup disk as the source, then present coaching tips that guide you through selecting the destination and (optionally) excluding items from the restore task.

Tasks can be scheduled to run once at a particular time in the future. After that run, the tasks will revert to run 'only when I click the Clone button'. We also added hourly runtime limits, allowing the user to limit a task to running only between 5PM and 7AM, for example. Hourly limits will prevent a task from starting if it's outside the specified run time, and if the task runs past the allowed end time, the task will be stopped.

Excluding a folder or two from a backup task has always been trivial with CCC, and now it's even easier to precisely define what should and should not be backed up. You can also now visualize the effects of custom filter rules, and now CCC 5 will report how much data is going to be backed up. A QuickLook panel shows you a preview of your files, and you can sort your file list based on name, size, or modification date.

The setup procedure for backing up to a remote Macintosh has been greatly simplified. SafetyNet pruning is now available for remote Mac destinations, and CCC 5 can now show you the content of a remote Mac source. Backups to and restores from a remote Mac have never been simpler!

August 22, 2017 Update: We have published a Kbase article that offers more up to date information on this subject here: Everything you need to know about Carbon Copy Cloner and APFS

Apple introduced macOS 'High Sierra' this week, and along with many other developers, we've eagerly started dissecting the new operating system to see what's new. Like in past years, those living on the bleeding edge are wondering, 'Will CCC work with this new OS?'. Or perhaps 'when' prepended to that same question. The short answer is that we have already posted a version of CCC that offers preliminary support for High Sierra. If you're running the Developer Preview of the new OS, open CCC and choose 'Check for updates' from the Carbon Copy Cloner menu to get the update. We've found a few issues of concern in the new OS. We addressed some of these issues in the current version of CCC; some will be dealt with in future beta updates as we continue testing.

Will I have to pay for an update to CCC that works with macOS High Sierra?

When we have completed CCC 4 qualification on High Sierra, we will issue an update to CCC 4 that is free to all current CCC 4 license holders.

The current version of CCC 4 already works with APFS insofar as CCC can copy files to and from that filesystem. The current version can also make bootable backups from an APFS startup disk to an HFS+ formatted destination volume – we've already tested that, and in the little bit of testing that we've done so far, that works great. The current feature set of CCC 4 will be qualified against High Sierra – creating bootable HFS+-based backups and working with CoreStorage encrypted backups will be qualified and functional (barring any OS bugs) and we aim to complete that by the time Apple ships High Sierra in the Fall.

Creating a bootable APFS volume, however, is brand-new territory. The semantics of starting a Mac from an APFS volume are completely different from those of an HFS+ volume. We have established a procedure to create an APFS startup volume, though, and we've even created a proof-of-concept bootable APFS clone. What lies ahead is a massive amount of engineering work to build support for these new procedures into CCC. APFS encryption is also handled quite differently from CoreStorage encryption, so we have a lot of work to do in regard to building in support for automatically unlocking and mounting APFS encrypted backup volumes. We're aiming to offer new functionality for creating APFS bootable (and optionally encrypted) backups by the time Apple ships macOS High Sierra in the Fall.

Stay tuned to our blog for updates on our progress and other news from Bombich Software. This will be an exciting Summer!

Choose 'Check for Updates' from the Carbon Copy Cloner menu to download the latest update. And be sure to update your backup before upgrading to Sierra!

Apple announced macOS Sierra today, and as soon as they make the developer pre-release available, we're going to start the process of qualifying CCC 4 against that OS. We'll start with a shorter collection of tests that verifies that nothing harmful is going to happen if you use CCC on that OS. Once that pre-qualification is complete, we'll post a beta release of CCC 4 that folks can use for testing on the new OS. Over the summer, we'll continue the full regimen of qualification and testing, and once we're happy with the results of our tests, we'll post an update to CCC 4 that runs on Sierra.

Will I have to pay for an update to CCC that works with macOS Sierra?

When we have completed CCC 4 qualification on Sierra, we will issue an update to CCC 4 that is free to all current CCC 4 license holders.

What happens if I try to run the current (stable) release of CCC 4 on macOS Sierra?

CCC 4.1.9 will open on Sierra, but you'll be greeted with a message stating that CCC isn't yet qualified on Sierra. For more information about how and why CCC presents this message, see Coping with Apple's pace of innovation in an application that can delete files.

Our preliminary testing turned up a couple really minor issues, which we've addressed and rolled into a beta release of CCC 4.1.10. If you would like to participate in CCC's beta testing program, open the Software Update section of CCC's Preferences window, check the box next to Inform me of beta releases, then click the button to check for updates. 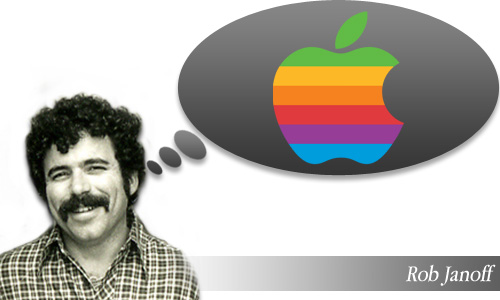 Recently Palo Alto Networks reported a 'ransomware' threat to Mac users named 'KeRanger'. After reading their analysis I found myself deeply concerned. Ransomware threats are nothing new, but I realized that this is probably the closest I've felt to the seedy world of cyber terrorism. Up until now all of that seemed to be aimed at governments, defense departments, big corporations... Windows users! Here we are, though, it's at our doorstep, and our neighbors are already victims. I received an email from a CCC customer yesterday that started with: 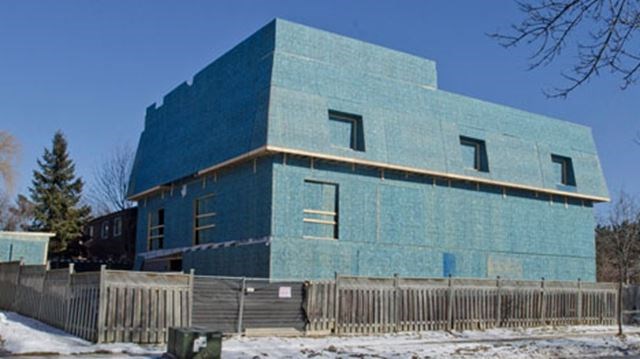 I happen to be one of the people who got hit with the ransomware hacks.

Yikes! I was not expecting a good outcome here. Thankfully, the rest of the email was:

Luckily I had a CCC of my drive and booted off that, deleted the ransomware files and was fine.

While this threat appears to be mostly contained at the moment, I think everybody should take some time to examine their defenses against this sort of attack. Having a backup is an obvious first step, but there are some additional steps that you can take to protect your backup too.

Protect yourself from ransomware

This particular ransomware attack is fairly clever. It lies dormant for a few days, then starts to encrypt your documents. It targets documents on externally-attached hard drives as well, and (in future developments) may even target Time Machine backups. CCC backups on external disks are vulnerable, as well. We have some suggestions that can help protect your backups from this sort of threat.

Keep your backup disk unmounted as much as possible 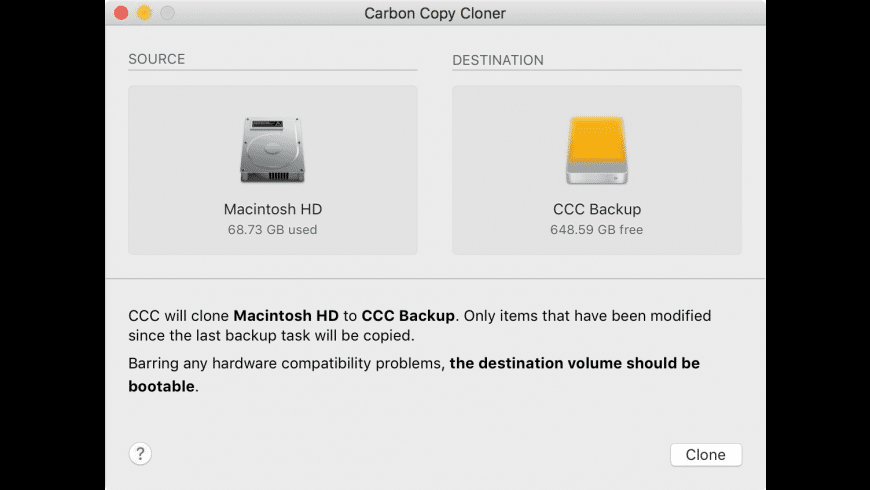 Encrypt your backup disk with FileVault

Keeping your backup disk unmounted is sufficient to protect you against the current KeRanger attack, but it may not protect your backup from future attacks. Finding attached-but-not-mounted devices isn't very difficult, nor is it difficult to mount those volumes once you've found them. If the cyberswine figure this out, you'll need an additional layer of protection. FileVault encryption will effectively prevent unauthorized applications from mounting your backup disk. Enabling FileVault... Read More

A security vulnerability was recently reported on the Sparkle framework that many applications, including CCC, use to manage application updates. The report indicates that applications using non-secure (e.g. http rather than https) URLs to retrieve application update information could be vulnerable to a 'man in the middle' attack.

We don't use any non-secure URLs within CCC, and that has been the case for a while. To be very specific in regards to the reported Sparkle vulnerability, CCC uses an HTTPS URL when checking for and downloading updates and release notes. In fact, as of CCC 4.1.5, it's not even possible for CCC to use an insecure (HTTP) URL, OS X El Capitan would forbid access to that resource.

Download CCC 4 today and make a bootable backup of your Mac!