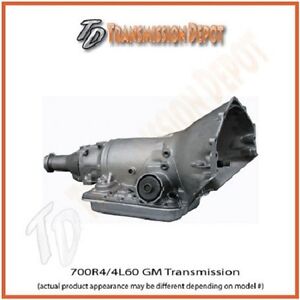 The 700R4 is a very popular transmission in 4×4 trucks. It is both proven and rugged. They can be found all day long in the salvage yard at a very reasonable price. If you are looking for one just keep in mind that the factory units are typically going to found in a Silverado or Sierra manufactured from roughly 1984 to 1992. The 700R4 4×4 version was cast with extra thick aluminum to handle the rigors of driving power to all four wheels. This case for the 4×4 version is known as the “K” case. In order to properly identify the off four wheel drive 700R4, you’ll first need to establish that you have one. After that just look for your K stamped real big on the passenger side bellhousing and you’ll be good to go.

Other than the obvious difference of having the funny looking tail shaft, and the less than obvious difference in the case rigidity the 2wd and 4wd versions of this transmission are identical. The gearing is the same, the TV cable works exactly the same, and it has a mechanical speedometer. Many off road guys really like the TH400, since it’s legendary exactly how bulletproof it is. For the 1986 model year the 700R4 was significantly improved and should not be discounted due to longevity concerns.

You can convert the 2 wheel drive 700R4 to the off road version. You’ll just have to change the output shaft out to accept the off road transfer case. There is a little modification involved. This forum entry has a decent take on it. People have had mixed results. Personally, I have a friend who did this and he’s had absolutely no issue with it for about four years now. But, buyer beware. Realistically there are so many solid units sitting in salvage yards right now that it’s really not necessary to go through all of this trouble.